Over the past 10 years, several high-profile US research groups have hypothesized that the typical changes in small pulmonary vessels that ultimately cause severe pulmonary hypertension (PAH) can be caused by primary insulin resistance in patients. The hypothesis was based on indirect observations of the sugar and fat metabolism of patients in an advanced stage of the disease. In cooperation with the MUG, the LBI has determined a direct measurement of insulin resistance in a complex parallel test with PAH patients and healthy controls that no differences in insulin sensitivity can be demonstrated. This was in the publication by Bence M. Nagy et al.  „No indication of insulin resistance in idiopathic PAH with preserved physical activity“ ERJ 2020: internationally published.

In the publication by Valentina Biasin, PDGFRα and αSMA mark two distinct mesenchymal cell populations involved in parenchymal and vascular remodeling in pulmonary fibrosis, J Physiol Lung Cell Mol Physiol. 2020; 318(4), Biasin deals with pulmonary fibrosis, which is characterized by scarring of the lung tissue due to extracellular matrix and collagen deposits. Myofibroblasts (αSMA+ cells) were believed to be the responsible cells for the matrix production and stiffening of the lung. However, recent studies have reported platelet-derived growth factor receptor alpha (PDGFRα) + cells to play an important role in lung fibrosis. Whether these two mesenchymal cells are separate lineages or trans-differentiation between these two cell type occurs during development of lung fibrosis is not yet elucidate. Additionally, what is the contribution of both cell type to matrix and collagen production. In this study we show for the first time that αSMA+ and PDGFRα+ cells mark two distinct mesenchymal lineages with minimal trans-differentiation potential in both parenchymal and vascular remodeling of lung fibrosis. Importantly we also show that both cells contribute to collagen production in lung fibrosis. These results suggest that αSMA+ and PDGFRα+ cells are both involved in lung fibrosis development and anti-fibrotic therapy should target this cellular heterogeneity 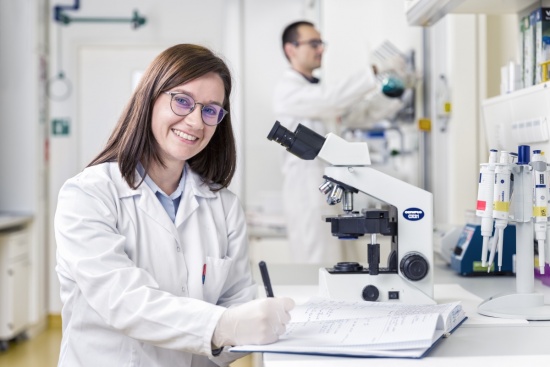